About the Port Natural Environment

The climate of the Ishikari Bay area is relatively warm for the Hokkaido region, which experiences severe winters.  Fine weather and moderate rain is common in spring and fall, summer is comfortable, and in winter the snow accumulates to approximately 130cm at most.

The wind direction is usually southeast to east-southeast in summer and northwest to west in winter. 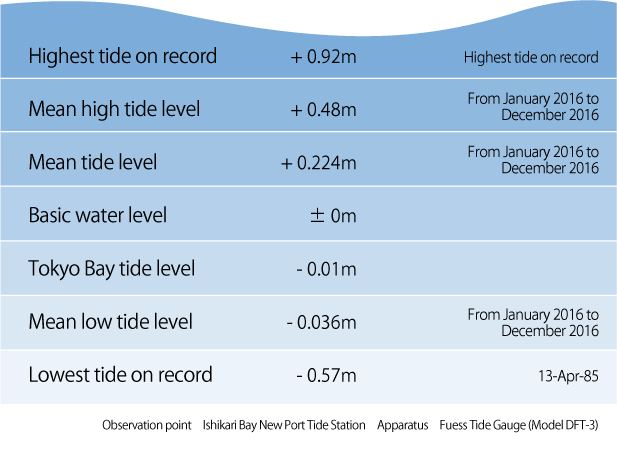 The port’s reference plane for construction is the same as the basic water level shown on the tidal chart, and is 0.01 meters higher than the tide level in Tokyo Bay, etc.

In addition, the direction of currents near the surface are to a certain extent affected by the winds, and have a strong tendency to move northward in summer and southward in winter.

High waves are caused by two main reasons: low air pressure passing northward over the Japan Sea, and blowoff from belts of high air pressure on the continent, primarily in winter.

Significant wave height is within 1 meter about 60% of the time.  The sea is very calm in summer, when that proportion rises to about 90%.

The biggest wave ever recorded was in February 1994 when a wave of 11.6m was observed with a period of 11.7 seconds.